Garrett Motion (GTX), a spin-off of Honeywell (HON), began trading on Monday, October 1, 2018. GTX’s primary business is selling turbochargers to automobile manufacturers. GTX is in a cyclical business and will have significant long term liabilities ($1.7BN of debt and $1.7BN of obligations to Honeywell to cover asbestos and tax liabilities).

I was initially skeptical of GTX given:

However, I decided to take a fresh look at the stock to make sure I wasn’t missing anything.

In GTX’s investor slide deck (slide 59), it mentions peers Borgwarner, Delphi, Cummins, Continental, Denso, Valeo, and Magna. My data provider (ycharts) has estimates for all of these companies except Continental, Denso, and Valeo so I excluded these names from my comp set. I added AutoLiv, another auto parts supplier.

GTX looks very cheap on a price to ‘18 earnings basis (5.5x vs. peers at 10.0x) and moderately cheap on an EV / ‘18 EBITDA basis (5.8x vs. peers at 6.2x). GTX’s EBITDA margins are inline with peers at 15%. GTX makes the argument that if one exclude its asbestos liability payments to Honeywell, it has ~20% EBITDA margin. I don’t agree with this exclusion as the asbestos payment will continue for the foreseeable future and is a cost of doing business as far as I’m concerned.

GTX’s has higher debt than peers (debt to ‘18 EBITDA of 3.3x vs. 1.0x), but intends to pay it down to 2.0x over time. I was initially super concerned with GTX’s debt load especially considering its asbestos liability. However, management estimates the weighted average cost of the debt will be ~4% and it doesn’t mature until 2026. These terms will give GTX more than enough time to make it through a recession.

Given its cheap valuation, GTX might be worth a short term trade.

Let’s give some thought to the downside. Given we are in the later innings of the economic expansion, Garrett’s business would be hit hard in a recession. Borgwarner (BWA), Garrett’s closest peer, saw EBITDA decline by 51% in the last recession. In 2009, it traded at ~9.0x Annual EBITDA at its bottom (it’s counterintuitive, but cyclicals often trade at higher multiples when earnings are depressed). Let’s assume that we have a serious recession in 2020 and GTX EBITDA declines by 50% to $248MM. Let’s also assume that debt has been reduced by $400MM to $1.2BN.

Where do I come out?

After looking at the upside and downside, GTX does look cheap. The one concern that I haven’t mentioned is the secular headwind it faces as electric vehicles take share from internal combustion engines.

Bloomberg – Electric Vehicles’ Day Will Come, and It Might Come Suddenly – August 2018

Bloomberg – For Electric Cars, Focus on the Small Picture – August 2018

As shown in the charts below, electric cars represent a tiny portion of the global car market, but they are growing significantly. 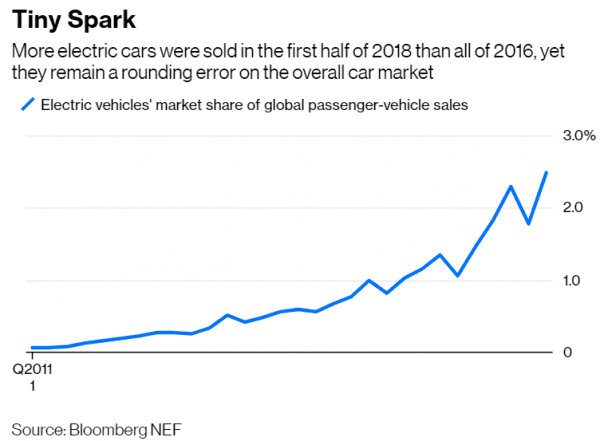 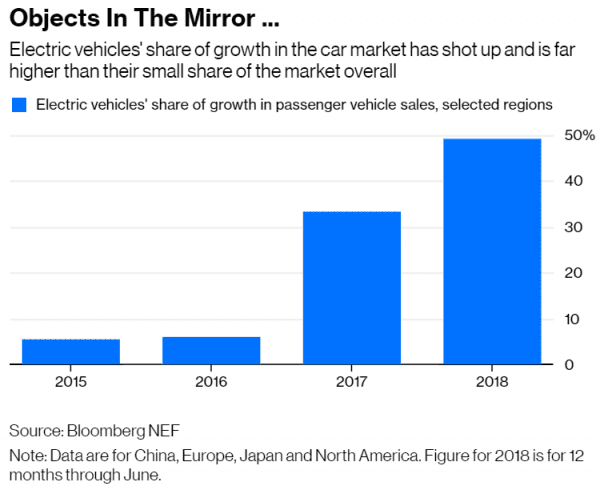 I believe the secular headwind from the increasing proliferation of electric vehicles will limit GTX’s top-line growth prospects and pressure GTX’s valuation multiple over the long term.

This is keeping me on the sidelines for now.