MSG Spin-off – What is the company worth?

Previous Next
MSG Spin-off – What is the company worth?

Madison Square Garden (MSG) will be spinning of its sports business in the first half of 2019. 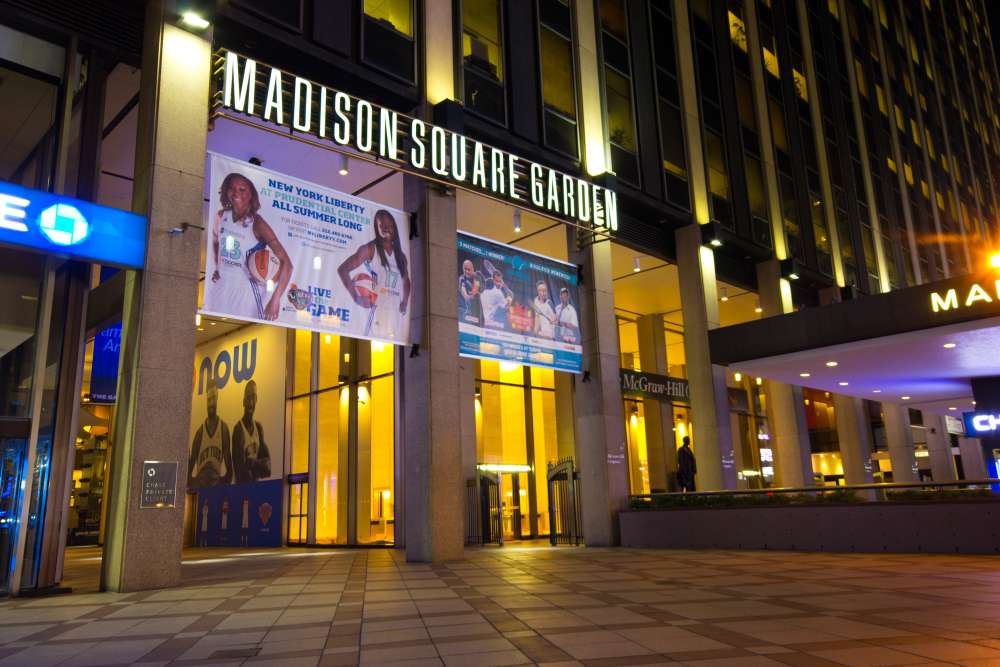 Rationale for the Spin-off

In a statement, MSG wrote:

“The proposed separation of the sports and entertainment businesses would enable investors to more clearly evaluate each company’s assets and future potential, while providing both companies with increased strategic flexibility to pursue their own distinctive business plan and capital allocation policy.”

This is a version of the token corporate line that all companies include when announcing a spin-off. And similar to most other spin-offs, we can cut through the language and home in on what’s important: valuation. At the end of the day, management thinks the company’s assets are worth more than is reflected MSG’s stock price.

The MSG investment thesis for a long time has been based on a sum of the parts analysis, and the spin-off will highlight the disconnect between MSG’s stock price and the value of its assets.

How Much is it All worth?

MSG intends to spin off a pure play sports company. The spin-offs assets will be comprised of:

Far and away the most valuable assets in the pure play sports company are the Knicks and the Rangers.

What are they worth?

Let’s start with the Forbes valuations. 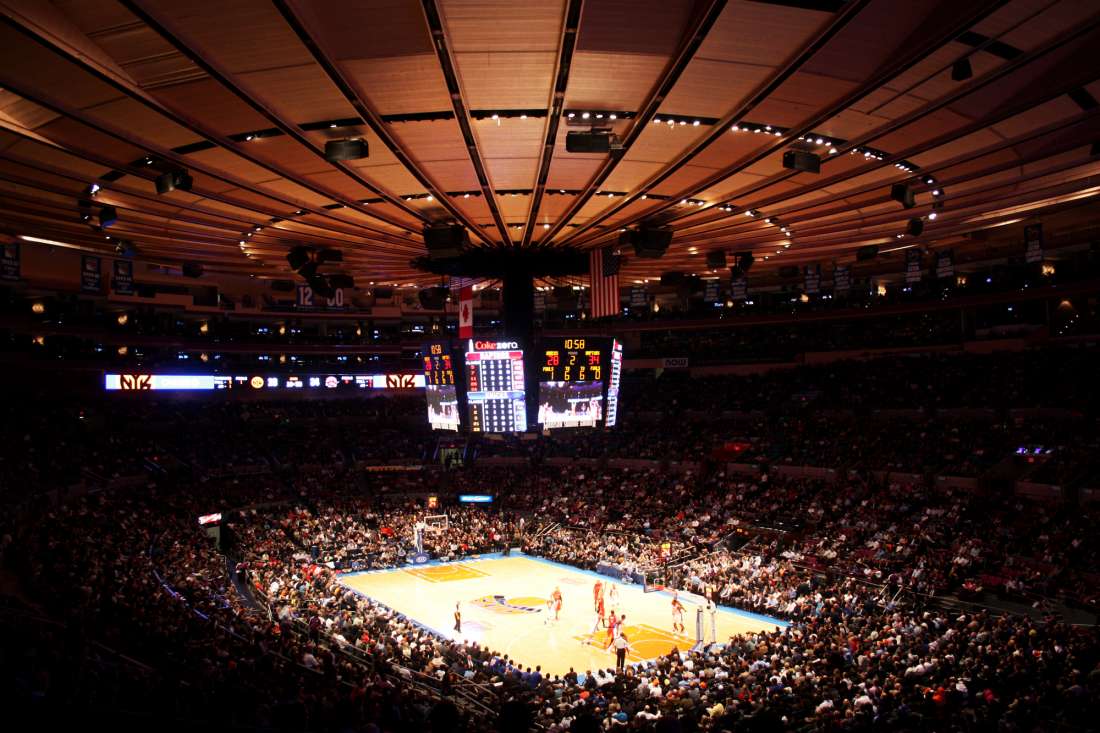 Forbes values the Knicks at $3.6BN and the Rangers at $1.5BN. Historically, the Forbes valuation has proven conservative. As shown in the chart below, the last 12 NBA team sales have taken place at a median premium to the last Forbes valuation of 38%.

What about the Rangers? 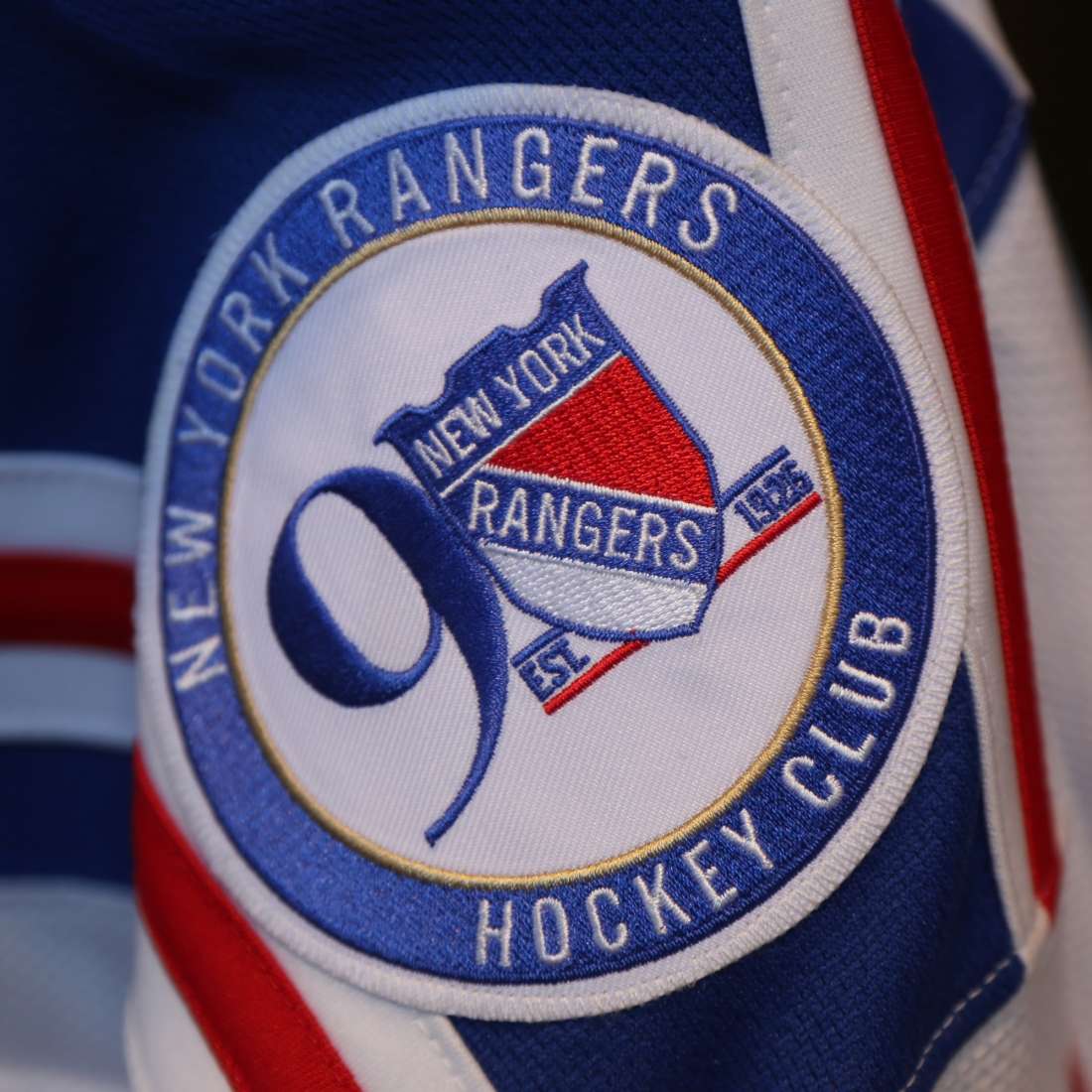 According to Forbes 2017 NHL team valuations, the Rangers are worth $1.5BN. However, similar to franchise sales in the NBA, NHL franchise sales have sold at a premium (20%) to Forbes’ latest valuation as shown below.

In our base case scenario, we can value the Rangers at a 10% premium to their latest Forbes valuation or $1.65BN. For our downside case and upside case, we can assume a 2% discount (Buffalo Sabres discount) / 20% premium (median premium). These assumptions yield a downside and upside valuation of $1.47BN and $1.8BN respectively.

The spin-off’s other assets have some value, but I’m going to ignore that value for now.

Now let’s move onto the remaining company (remainco). The remainco is focused on live entertainment and will include:

The biggest valuation drivers for remainco are Madison Square Garden and net cash.

Madison Square Garden is assessed for taxes at $1,200MM. As of MSG’s latest quarterly filing, the company has $1BN of net cash on its balance sheet. Let’s pause here and add up the value of the assets that we’ve reviewed. 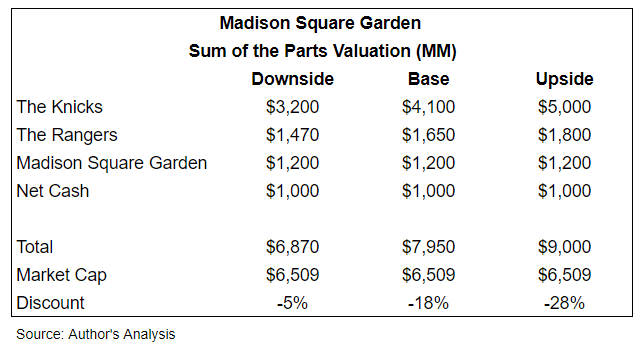 So at a minimum, it appears that MSG is trading at a 5% discount based on its sum of the parts valuation.

But we haven’t included several of MSG’s additional assets.

Madison Square Garden has air rights (the right to build or develop in the airspace above a property). MSG hasn’t disclosed much about its air rights, but investors estimate MSG has 1MM to 3MM of air rights. As of 2017, air rights went for $225 per square foot. Thus, the value of these air rights could range from $225MM to $675MM.

MSG also has some other assets which should be noted. I haven’t done in depth valuation work on these assets (they are not major drivers) so I’m going to borrow J.P. Morgan’s valuation. 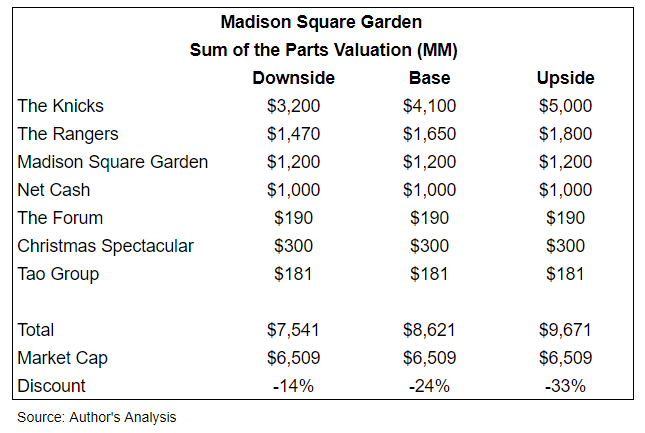 As shown above, MSG appears to be trading at a 24% discount to its private asset value in our base case.

Is the Discount Warranted?

The primary reason MSG trades at a discount to its private market value is because the company is controlled by the Dolan family (over 70% of voting stock and over 20% of common equity). And investors generally don’t believe that the Dolan family wants to sell the Knicks or Rangers, thus, the true valuation of the franchises will be hidden for the foreseeable future.

However, the structure of the spin-off may solve this problem.

The remainco (the entertainment company) plans to retain a ⅓ interest in the spin-off (sports company). Why? Because it needs to finance the construction of the “Sphere” venues in Las Vegas and London which will cost more than the $1BN of cash that it has on hand. It will have the ability to sell a portion of the sports company.

Commentary from MSG’s CFO on the fiscal Q4 conference call helps clarify how the entertainment company will use its stake in the sports company.

“So as you know, we currently propose that the entertainment company will start with $1 billion of cash on hand and will retain a minority stake in the sports company. This will enhance our ability to pursue our growth plans and also give us the ability to opportunistically exchange shares for our own stock.To your point where we ultimately end up in terms of raising capital versus exchanging shares really hasn’t been determined, and it will depend on a variety of factors that go into the decision process, including how the stock trades, the capital needs of the entertainment company and whether we decide to tap the debt market at some point.”

My interpretation is that the entertainment company will likely sell a portion of the sports company, and with the remaining shares perhaps complete a share exchange to effectively buy back its own stock.

To take this one step further, if the entertainment company were to sell a 15% stake in the sports company, not only would it raise additional capital needed for the construction of the Sphere venues, but it would provide a hard valuation of the sports company. This could be a significant catalyst as NBA/NHL franchises sales have traded at a significant premium to the Forbes valuation.

This catalyst could narrow the gap between MSG’s private market value and market capitalization.

Among media peers, MSG is well positioned as its sports and live event business is immune to cord cutting.

Further, NBA and NHL franchises benefit from an attractive supply/demand dynamic that should continue to support franchise value appreciation. Since the 2004, the number of NBA franchises has held steady at 30. Over the same period, the NHL has added one franchise (there are currently 31). Meanwhile, the number of billionaires (potential buyers) in the world has increased by ~400% over the same period. I don’t see this trend changing; wealth continues to be ever more concentrated at the top. The number of billionaires will continue to increase and those billionaires will continue to covet trophy assets such as fine art and professional sports franchises, driving prices higher.

Finally, the professional sports is a recession resistant business. This is particularly attractive in the current economic cycle.  See total NBA and NHL league revenue below. Revenue grew in both leagues during the recession (2009). Note the revenue declines in 2011/2012 (NBA) and 2012/2013 (NHL) were due to lock-outs. Importantly, revenue quickly recovered following the lockout.

About the Author: Rich Howe